Scott Bruno shares his experiences with beekeeping, out back in Ohio. 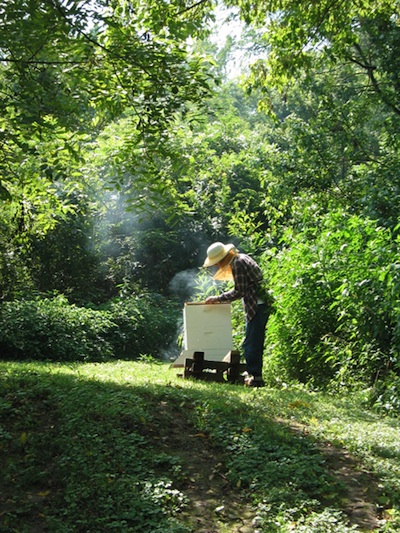 For beekeepers, each spring is a brand new start. We spend the winter preparing for the upcoming season — building or repairing frames and boxes, cutting out and replacing old comb. Winter is also a good time to reflect on the past season and it’s successes and failures. Beekeeping may be part art, part science, but it’s definitely a process that can only be learned through experience. Entering my sixth year of beekeeping, I’m happy to say I’m less prone to making the outright boneheaded mistakes that I made in the first couple years. Through experience and the mentoring of veteran beekeepers, I’m learning to evaluate the conditions in the hive and letting those conditions dictate the corrective or preventive actions I take.

Spring 2009 couldn’t have been better for beekeeping, at least for my hives. Bees forage in a 3-mile radius around the hive, so the conditions in that 6-mile circle — weather, forage, water supply — dictate their health and success. In 2009 my 6-mile-forage had the perfect combination of sunshine, rainfall and warmth, and the Black Locust trees were loaded with blossoms. At the end of spring, I pulled 120 lbs. of honey from two of my three hives. The honey this year was very light with a distinct floral aroma, different from last year’s harvest which was much darker with a molasses-like consistency and richness. I’ve harvested honey four times from this location, and each time the crop has been distinctly different. I attribute the difference to the available forage during the spring; I can’t ever remember seeing as many Black Locust blossoms as in 2009, but there wasn’t nearly as much spring clover as I had recalled.

I began the 2009 season with three hives, all of which had wintered over from the previous year. Beehives don’t survive indefinitely, despite the beekeepers diligence in preventing disease, mite infestation and swarming. In Ohio, beekeepers average a 20% loss over the winter; that is, in an average winter a beekeeper with ten hives can expect two of them to die off. In the five years I’ve kept bees, I’ve lost a total of four or five hives over the winter, some to mite infestations, most to freezing. I’ve had my best luck with a Russian hive which has survived two winters and is in the midst of it’s third. At this point, it would be a stretch to consider it a pure Russian strain, since it has swarmed and requeened twice during that period. There are methods for controlling swarming — the bees natural method of propagation — but none are foolproof. Personally, I’m not too concerned if my hives swarm, providing it’s early enough in the season for the hive to build up strength for the winter. Swarming can put a huge dent in honey production, since there is a month-long lull before new workers are ready to forage, but because I keep bees for my own amusement rather than as a business a smaller honey harvest doesn’t concern me.

Despite my indifference to swarm-control, swarming did cause a problem for me in the summer. Typically, a new queen will emerge soon after the old queen has absconded with a large portion of the workers to form a new hive. For reasons I haven’t determined, one of my hives swarmed but never requeened. Because the hive remained queenless, over time a worker decided to take on the queen’s egg-laying duties. Since workers have never mated, the eggs a worker lays are not fertilized, which means they are all drones. A hive that produces drones but no worker bees can’t survive, as workers are the only bees which forage and bring in food.

The remedy for ridding a hive of a laying worker involves a tedious, labor-intensive process. Luckily for me, I’d caught the situation before the hive had been overrun with drones. I was able to successfully combine the remaining bees with another stronger hive; most likely, the laying worker was killed or driven out by the queen. As a result, I’ve entered this winter with two hives rather than three. I can see the empty hive through my window; three inches of snow sits on the top cover. When spring comes, I’ll buy a package of Russians and start again.

swarm: swarming is when the queen leaves the hive with a bunch of the workers and establishes a new hive elsewhere. The bees left behind raise a new queen (a new queen is on the way - ie in the cell developing - before the old queen leaves) and the colony continues. It's how bees propagate and establish new colonies. Each colony can have only one queen.

drone: a male bee. All of the worker bees & the queen are female; all of the drones are male. Female bees come from eggs that have been fertilized, drones come from unfertilized eggs. The drones don't do anything in the hive; their sole purpose is to mate with a virgin queen when she goes on her mating flight. Otherwise, they just hang around the hive and eat. When winter approaches the workers drag all of the drones out of the hive and leave them to die. 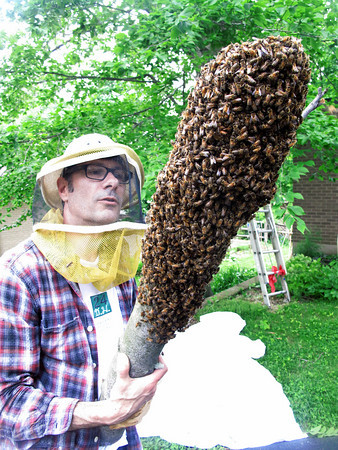 Swarm on a stick! Photo by Steve Paszt

Also, Unique Bee Nests Found, Made Out of Petals