My husband and I had often entertained the idea of raising chickens for the purpose of having home-grown, fresh eggs. Then the opportunity arose. Our neighbour in Honolulu, Hawai’i, had two lovely hens that she needed to find a home for. She lived on an intersection that was too busy for her to let the chickens roam around her yard safely. We happily took her chickens. She and her son had named the chickens Bacon and Eggs and they referred to them collectively as Breakfast. Of course the names were so cute they stuck. As you can see from the pictures, they were Rhode Island Reds. 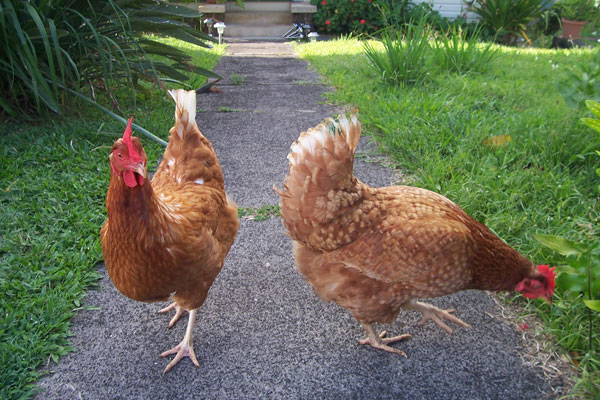 We were lucky because we had an old, old shed in our backyard that we eventually wanted to demolish. So, we just cut a hole in the wall and, on the outside, created a small, enclosed chicken run out of chicken wire. The shed already contained some shelves and drawers. Once we covered the inside with straw, and sometimes yard clippings, Breakfast used the shelves for roosting and used the now-empty, straw-filled drawers as nesting boxes. Chickens like to be off the ground when they sleep. Cleaning the indoor coop was easy. About once a month I would empty the nesting boxes and brush all the straw and yard clippings to the floor, then just sweep the soiled straw into a garbage can. Then I would either put the straw into our compost bin or use it in the outdoor chicken run if it had been wet and rainy. 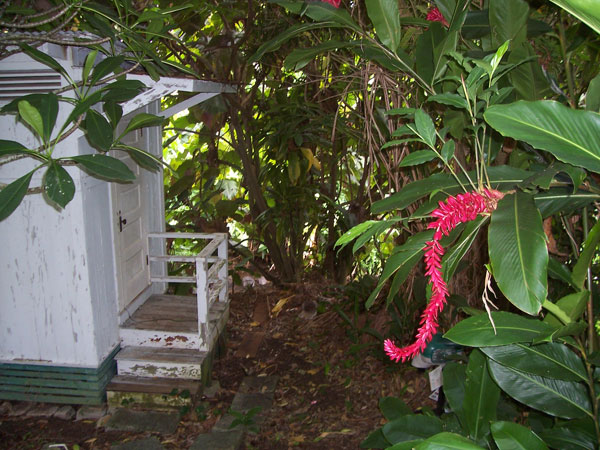 Our chickens stayed in the coop the majority of the time since my husband and I both worked full-time day jobs. Upon returning from work, one of us would let the chickens out to roam. We would open the coop door and Bacon and Eggs would come trotting out. They loved to roam around our yard and eat the bugs and slugs in the grass, and it would take them a couple hours to make their circuit around the house. Our chickens were well socialized and liked to be around people. If we were out in the yard, they would hang around us or run over to see what we were doing if we entered their domain. This is when we discovered the one annoying trait of our Breakfast . . . Chickens do not have good eyesight and tend to peck at things that move. So, if we were walking across the grass and not paying attention, the chickens had a habit of running over to peck our feet. Their pecks did not really hurt, but it was a little annoying and occasionally led to one of the chickens getting punted across the yard. Imagine carrying an armload of yard rubbish to your compost bin and accidentally kicking your beloved chicken, who is too stupid to know that your toes are neither delicious nor bite-sized. An unpleasant experience for all involved! As I said, chickens don’t have the greatest eyesight and their night vision is really bad. This led us to the happy discovery that at nightfall they would just go back into their coop to roost for the night. All I had to do was close the door so nothing else went into the coop at night. But, if somehow the door had closed without us knowing, we would find our Breakfast in the trees where they would roost for the night. No worries. 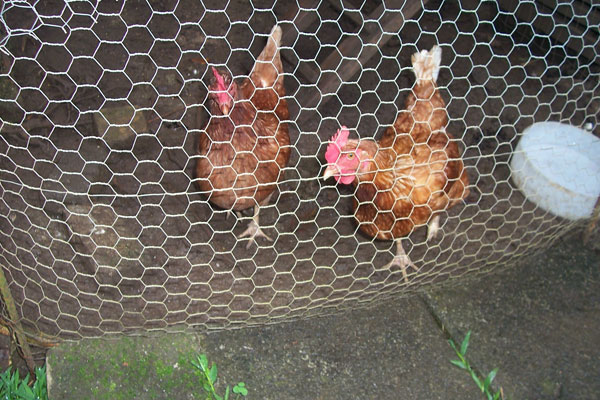 We fed our chickens every morning and changed their water daily. We bought chicken feed at the local feed store and supplemented their food with kitchen scraps. I gave them about a cup of feed each day, tossing it into the outside coop through the chicken wire so they could scratch at it through the day. I would feed them kitchen scraps whenever they were available. Maybe after preparing a meal they would get vegetable peels and leftover rice or oatmeal whenever I cleaned the fridge. In turn, Breakfast shared their eggs with us. I collected the eggs when they appeared in the nesting boxes and the chickies did not take issue with me taking their lovely eggs. Breakfast produced a little less than an egg a day each, and we averaged roughly one dozen eggs total per week. Breakfasts’ eggs were the most delicious I have even eaten and the prettiest I have ever seen; the brown eggs would be considered ‘’jumbo’’ size and the yolks were papaya orange. The eggs keep for weeks when refrigerated.

Raising chickens for eggs was rewarding and easy with the added benefit of nice compost and decreased bug populations. The only reason we quit egg farming and gave our lovely Breakfast to some dear friends was that we went overseas to serve as U.S. Peace Corps Volunteers. I look forward to raising chickens for eggs again as soon as we are settled enough to do so.

For some information about the different grades of eggs you may find in the grocery store, look here: http://www.takepart.com/news/2010/04/01/eggs0